Gary’s Tips for a Great Ceremony 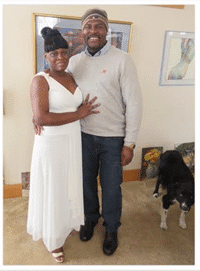 This Haitian couple present a contrast in wedding apparel: she in a gown, he quite casual. Brind’Amour wore wore his usual tuxedo black with white trim.

Having officiated hundreds of wedding ceremonies and directed a few more, I’ve seen what works and what detracts from the smooth flow and energy build-up that culminates in the pronouncement.

1) Your guests have assembled at the time you’ve specified. They’re eager for the show to begin. Show them respect — and gratitude! — by beginning at the announced ed hour. Short of a medical emergency, there’s simply no excuse for a late start. This is especially true of outdoor weddings in summer. I’ve seen people sitting in the sun faint while waiting for a ceremony to get underway. Late starts are usually caused either by a bride not allowing enough time to get dressed or a couple holding things up because a member of the wedding party has yet to arrive. Brides do well to allow double the time they think they’ll need to get the gown and make-up on. As for late a groomsman, bridesmaid or relative not having shown up yet, they aren’t essential and punishing all those folks who made it on time by making them wait for someone who didn’t allow for traffic or the distance to the venue strikes me as inconsiderate. More important for you is that your guests get restless and their energy wanes.

2) Wedding processions, the entrance of bridesmaids and groomsmen, is a warmup for the main event, which begins with the bride’s entrance. No need for one pairing of bridesmaid and groomsman to make their way to the altar before the next starts down the aisle. Any more than 20 feet between pairings slows the pace when briskness is called for. The bride’s the main attraction and can enter — whether alone or accompanied by her father or another male relative — at the pace of her choosing. The most effective entrance this wedding officiant’s ever seen was that of a hispanic bride and her father who danced to the aisle. The fun they were having and the lively music put the guests in a festive mood.

A geriatric beagle and nine monthold lab-pitbull mix served as witnesses at a Christmas Day wedding in our chapel. Clearly they were intrigued by having their picture taken, a little less intrigued by putting their linked paws on the license where witnesses sign.

3) Your photographer works for you, not you for him/her. If because her or she want to take every possible combination of people against every available backdrop your guests have to sit around for two hours after the ceremony waiting for the reception to take place their energy dissipates. I’ve seen it happen time and again. A professional photographer doesn’t need to take 1200 exposures to get a dozen good shots. So don’t let your person behind the camera hold up a party that should begin soon after the ceremony because you want the energy generated from the ceremony to spill over into the reception. The real pros among photographers, I’ve noticed, do the bulk of their work before and during the ceremony. Make clear to any vendor you hire — including the wedding officiant — what you ou expect. You and your guests deserve no less.